The GREAT CLASSICS series from Naxos is the perfect introduction to myriad genres of classical music. Comprising both complete and compiled selections from the greatest works in the repertoire, the boxes are bursting with wonderful pieces of music, both recognizable and unfamiliar. The boxes take the listener on a thrilling tour of some of the world’s most dramatic musical media, encompassing music from six centuries and featuring sensational performers. All boxes come with a fascinating booklet with detailed information on the genre itself, chronological placement of each work, and a comprehensive study of the music. A fitting celebration of 25 years of superb music from Naxos, the world’s favourite classical label.

The booklets contain introductions to each genre plus notes for each work. 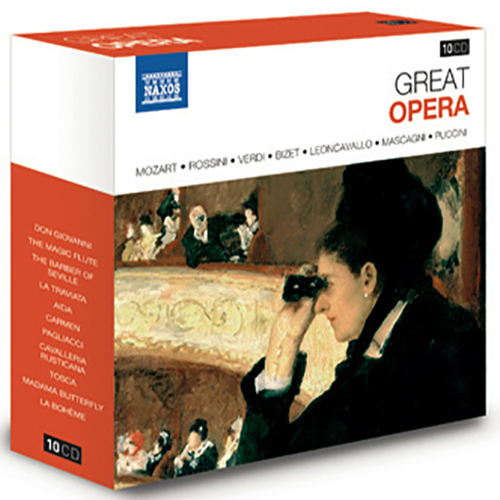 The very first operas were performed in Florence in the mid-1590s. Since then, musical styles have blossomed and evolved out of all recognition, yet opera continues to be heavily influenced by the political, social and cultural contexts surrounding its genesis. A collaborative enterprise, an opera brings together the works of composers, librettists, singers and designers alike, generating rich veins of public response and resulting in what is surely the most dramatic of all musical media. In this collection, we have brought together some of the most-loved operas, ranging from the elegance of Mozart’s Don Giovanni to the raw emotion of Mascagni’s Cavalleria Rusticana. The lighthearted japes of Rossini’s Barber of Seville contrast royally with the pomp and spectacle of Verdi’s Aida, whilst the sultry allure of Bizet’s Carmen is the perfect foil to the lachrymose tragedy of Puccini’s La Bohème. This box is sure to entice any listener further into the magical world of opera.

BACK TO TOP
GREAT BALLET 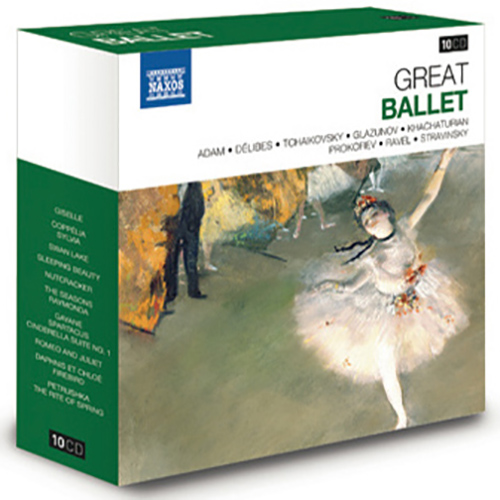 Ballet was born from the late Renaissance movement in Europe, combining the classical skills of music, dance and drama. Its origins can be traced back to the dance traditions of the nobility in the French and Italian courts of the fifteenth century. The creation of classical ballet as we know it was developed under the auspices of Louis XIV, and was then further refined in France and Russia in the nineteenth century into the hugely influential and highly skilled concert dance form with which we are familiar today. Fittingly this collection starts in France, with one of the most haunting and memorable examples of the ballet form: Adam’s Giselle. We are then swept along in a whirlwind tour of some of the greatest Russian ballets by such great composers as Prokofiev, Khachaturian and Shostakovich, while no ballet anthology would be complete without Tchaikovsky’s three Romantic masterpieces Swan Lake, Sleeping Beauty and The Nutcracker. From Delibes to Stravinsky, this collection amply demonstrates why ballet remains one of the most loved musical genres.

BACK TO TOP
GREAT CONCERTOS

At the very heart of a concerto is the interplay and contrast of a solo instrument within a larger instrumental ensemble. The natural progression from the Baroque concerto grosso, the concerto as we know it was fully established as a concert staple in the eighteenth century, and many works dating from this period are still a key part of the repertoire today. The opportunity for dazzling virtuosic display from the soloist has resulted in the concerto becoming a vital musical force both on the concert platform and in the audience arena. 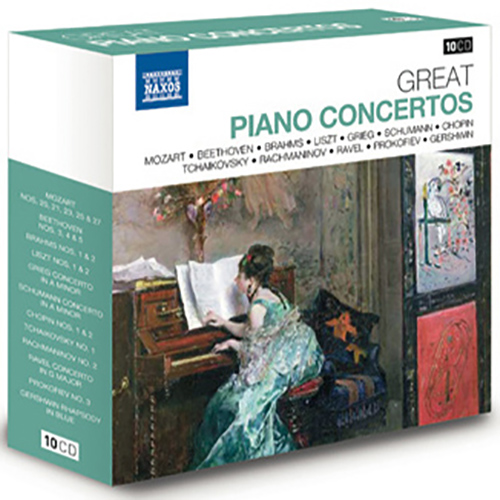 The most important composer in the development of the early piano concerto was Mozart, whose masterly compositions for the instrument paved the way for expansion of the form by composers such as Beethoven, Schumann, Brahms and Grieg. In the Romantic era, composers such as Rachmaninov and Tchaikovsky lent a distinctly Russian fluency and passion to the idiom, whilst no pianistic survey would be complete without the transcendent concertos of those great piano masters, Chopin and Liszt. The twentieth-century transformed the piano concerto yet further with splendid offerings from a delicate Ravel, fiery Prokofiev and jazzy Gershwin to name but a few. 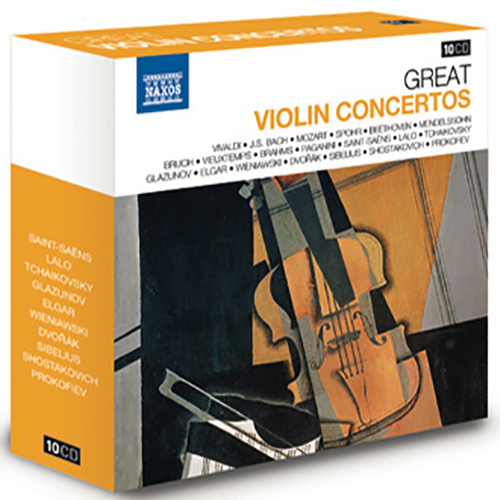 The violin concerto owes a great deal of its development to the technical achievement of performers, and to this day many works are renowned for their fierce technical demands. Indeed, many composers who have written for the instrument were superlative players themselves – Wieniawski and Paganini among them. The fascinating history and capabilities of the instrument can be traced through the compositions contained herein; from the gossamer threads of Vivaldi to the exhilarating fireworks of Prokofiev, via the lilting swagger of Lalo and Saint-Saëns and nationalistic panache of Sibelius and Glazunov.

BACK TO TOP
GREAT SYMPHONIES

The word ‘symphony’ is used to describe an extended orchestral composition in Western classical music. By the eighteenth century the Italianate opera sinfonia – musical interludes between operas or concertos – had assumed the structure of three contrasting movements, and it is this form that is often considered as the direct forerunner of the orchestral symphony. With the rise of established professional orchestras, the symphony assumed a more prominent place in concert life between 1790 and 1820 until it eventually came to be regarded by many as the yardstick by which one would measure a composer’s achievement. 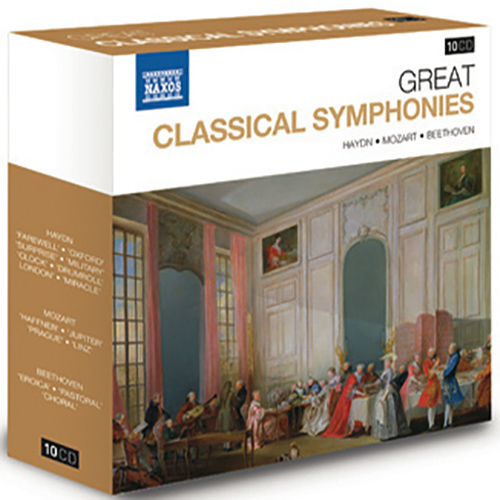 Without doubt, the most important symphonists of the latter part of the eighteenth century are Haydn and Mozart. Often credited with expanding the symphonic form to the four movements we are familiar with today, these two composers are together responsible for over 160 symphonies including those commonly regarded as the apex of the Classical symphonic form – Haydn’s London symphonies and Mozart’s Jupiter and Linz. A few years later, Beethoven dramatically expanded the symphony, in so doing forming the bridge between the Classical and Romantic eras. His Eroica symphony has a scale and emotional range that sets it apart from earlier works, while his Symphony No. 5 is arguably the most famous symphony ever written. 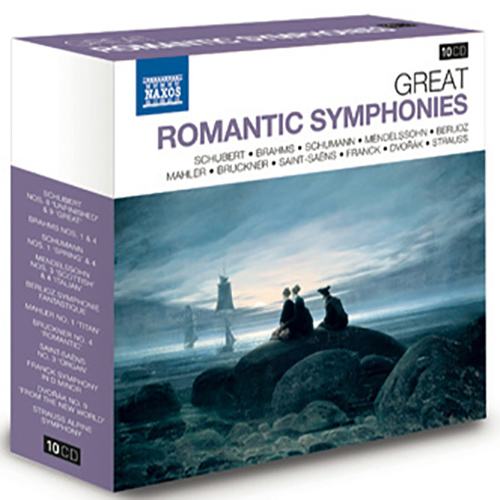 The nineteenth century brought various changes to the symphonic form. Although both inspired by Beethoven, Berlioz’s experiments with instrumental colour and orchestral size are a world away from the colossal symphonies of Brahms. Composers such as Mahler and Bruckner pushed the traditional symphonic landscapes to their limits, in sharp contrast to the uplifting Classically-based symphonies of Mendelssohn and Schubert. The nationalistic flavours apparent in the programme symphonies of Schumann, Strauss and Dvořák exemplify the way in which the symphonic form flourished in the Romantic era, whilst the visceral impact of the Gallic panache is typified by the symphonies of Franck and Saint-Saëns. 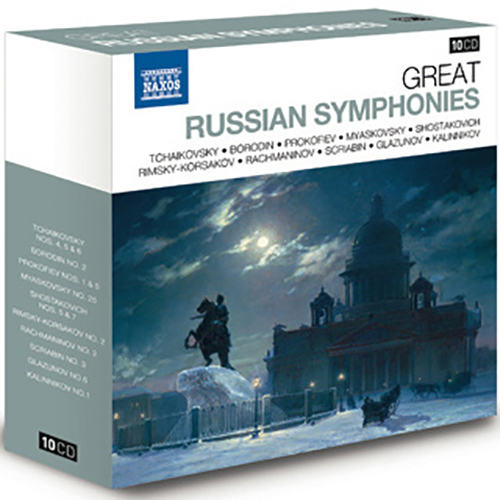 The symphony came late to Russia. The first attempts at a Russian Nationalist symphony were made in the late nineteenth-century by Balakirev and his acolytes, Borodin and Rimsky-Korsakov as well as by Tchaikovsky, whose symphonies (despite his European leanings) have a distinctly Russian flavour. In their wake followed numerous composers, from Glazunov to Myaskovsky, similarly instilling their music with the melodies of their homeland. In the years that followed Russian politics had an unmistakable impact on the Russian symphonists, as Rachmaninov and Prokofiev (among others) went into exile whilst composers such as Shostakovich vented their political frustrations through the medium of music – his Leningrad Symphony being a prime example.

BACK TO TOP
GREAT BAROQUE MASTERPIECES 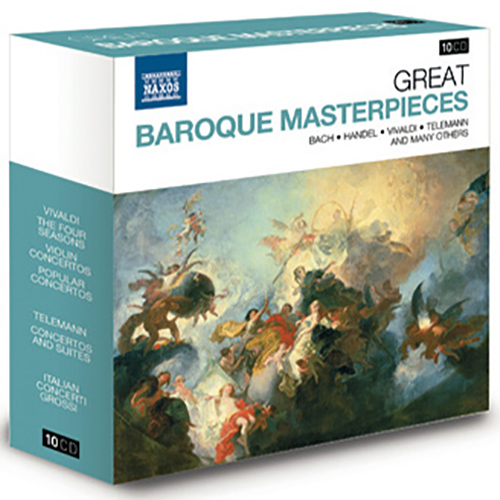 Baroque music describes the period in Western classical music dating from approximately 1600 to 1750. The Baroque period saw the development of functional tonality, as well as new instrumental playing techniques and musical notation. It was during this time that opera was established as a musical genre, and the period also saw the expansion of the range and complexity of instrumental performance.

This collection concentrates on the instrumental music of the period. No survey of the Baroque would be complete without the music of J.S. Bach, whose Brandenburg concertos are commonly regarded as the apex of Baroque music. The radiant concertos of Vivaldi demonstrate the exhilarating range of instrumental colour that flourished at this time and contrast with the orchestral zest of Handel’s robust Water Music. From classical favourites such Pachelbel’s Canon and Albinoni’s Adagio, to Concerti Grossi from composers as diverse as Corelli, Handel, Locatelli and Geminiani, this set is the perfect compilation of works from this most fascinating of eras.

BACK TO TOP
GREAT SACRED MASTERPIECES 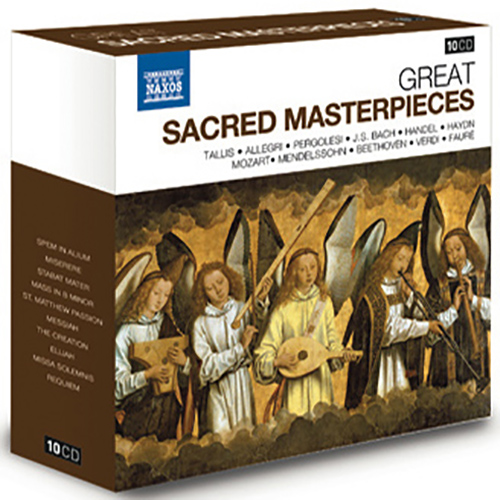 Music has always had an important part to play in religious ritual. Records show that plainchant existed from as early as 3 A.D., and centuries later it was to provide a foundation for early polyphony and for the great flowering of Church music in the Renaissance, including the transcendent works of Tallis and Allegri. J.S. Bach wrote most of his music for the Lutheran Church, including the magnificent Mass in B Minor and the two Passions. Handel also contributed to religious music in England, with the creation of oratorios such as Messiah which, when witnessed by Haydn years later, inspired him to write The Creation. In the nineteenth century the form flowered again with Felix Mendelssohn, himself responsible for bringing many sacred works by J.S. Bach back to musical prominence. He completed Elijah in 1846; a work that, although modeled on the Handelian oratorio, clearly reflected in its lyricism and use of orchestral and choral colour Mendelssohn’s own genius as an early Romantic composer. Particular attention has been given over the years to settings of the Requiem Mass. This collection includes three versions – from contemplative Mozart, to awesome Verdi, and sublime Fauré. Without doubt, in the years to come, religion will continue to be the driving inspirational force behind many a composition.