Aaron Copland’s score for the documentary film The City, made for the 1939 World’s Fair, was recorded on 15 October 2007 by the PostClassical Ensemble, under the direction of its conductor Angel Gil-Ordoñez. The entire film and its full score, including narration of Lewis Mumford’s script and commentary by documentary filmmaker George Stoney, will be released on a Naxos DVD.

The recording session took place at the Elsie & Marvin Dekelboum Concert Hall of the University of Maryland. The producer was Steve Zakar. The engineers were Daniel Shores and Dan Merceruio of Sono Luminus. Jim Curtis was the editor. This recording was made possible with support from the National Endowment for the Arts and the Clarice Smith Performing Arts Center, University of Maryland, College Park.

The PostClassical Ensemble, with Angel Gil-Ordonez, can be heard on a Naxos DVD showcasing two 1930’s American documentary films by Pare Lorentz (The Plow that Broke the Plains, The River 2.110521), with the complete original film scores by Virgil Thomson. A compact disc of the scores themselves is also available (8.559291). 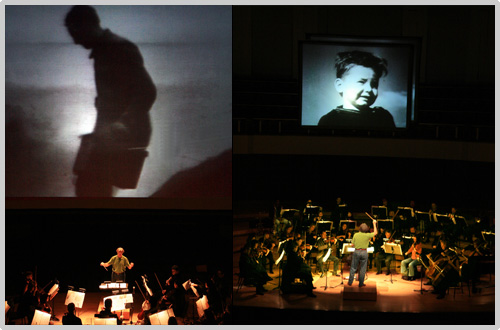