The National Polish Radio Symphony Orchestra, conducted by Mark Fitz-Gerald recorded the complete music for the film Podrugi (Girlfriends), the wonderfully inventive incidental music for Adrian Piotrovsky’s stage play Rule, Britannia!, an anti-capitalist tale about a Northern English businessman who takes advantage of his workers, and for Alexander Afinogenov’s stage play Salute to Spain, written in praise of the Republican forces during the Spanish Civil War. All three works come from one of the most fertile and brilliant periods of the composer’s creative life and are almost completely unknown.

The recording, due for release in May 2009 on Naxos 8.572138, concludes with the January 1945 Symphonic Fragment, Shostakovich’s first, unfinished version of his Symphony No.9, one of a number of unidentified manuscripts discovered in the Shostakovich archive in Moscow in December 2003.

Reconstructed by Mark Fitz-Gerald from various original sources, including the 1936 soundtrack, and a number of recently discovered Preludes, Podrugi (1934–35) is one of Shostakovich’s best and most experimental early film scores. It tells the story of three girls who grow up together and go on to be First World War nurses. Matching the developing personalities of the three girls, Shostakovich subtly expands his palette as the film progresses, beginning with his first experiments in writing original music for string quartet, some of which he recycled in the String Quartet No.1 of 1938, followed by movements for string quartet with the addition of piano and trumpet, which recall the Piano Concerto No. 1 of the previous year. The score also includes a number of fanfares, a wacky version of the Internationale played on theremin, and climaxes with an extraordinarily poignant orchestral funeral march as one of the girls dies from gunshot wounds sustained at the front.

This is Mark Fitz-Gerald’s second recording for Naxos following his highly acclaimed reconstruction and recording of Shostakovich’s music for the ‘sound-silent’ film Odna (Alone) released on Naxos 8.570316. 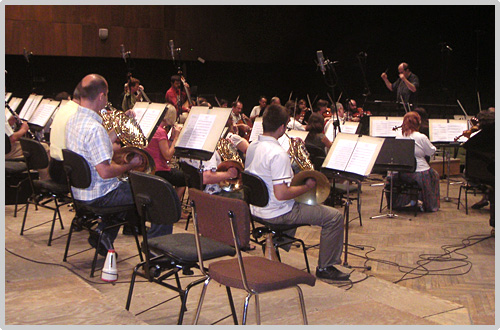