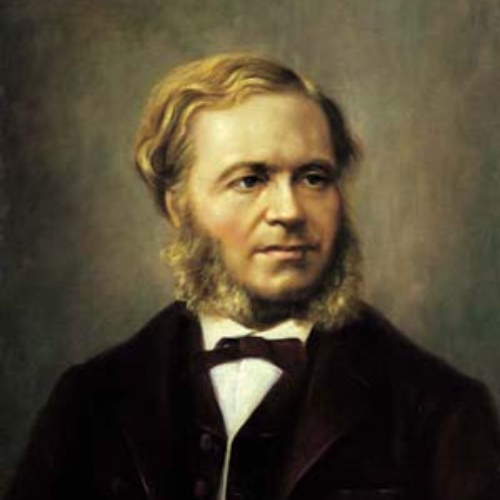 Pater seraphicus is how the 19th-century pianist/organist/teacher/composer César Franck was known to his pupils. It might be fair to suggest that the consonant Panis angelicus, Franck’s setting of a verse from an ancient hymn, is how he’s best remembered by music-lovers with only limited knowledge of his output. Has the passing of time treated him fairly? This year marks the 200th anniversary of Franck’s birth in 1822, so our blog has lined up some examples of his output, not all of them as renowned as his Violin Sonata in A major or the Symphony in D minor.

Belgian by birth, French by choice, César Franck was born in the Walloon city of Liège. The musical gifts he displayed at an early age were encouraged by his father, who saw the possibility of a career for his son as a virtuoso performer. In 1837 he was admitted to the Paris Conservatoire, where he began to win some distinction. The natural course for him would have been to participate in the important Prix de Rome, victory in which would have brought three years’ study in Rome. But in 1842 his father withdrew him from the Conservatoire, again seeking a career for his son as a performer, initially in Belgium, where it was hoped to interest influential patrons. Two years later the Francks were back in Paris again.

We start with an early foray into keyboard display from those unsettled years, written when Franck was only thirteen: his Second Grand [Piano] Concerto in B minor. The vision of the teenage composer/soloist strutting his stuff in a putative performance of the work brings a smile to the face, and some pleasure to the ear. Here’s the opening of the rondo finale.

With just a few more years on his clock, we move to the set of three piano trios the 19-year old wrote in 1841, dedicating them to King Leopold I on the insistence of his father (according to Vincent d’Indy, one of Franck’s students) to reinforce the fact that César was Belgian. It was no less a figure than Franz Liszt who suggested that the last movement of one of the trios should exist as a stand-alone work and be replaced by new material. That extricated single movement became the Trio No. 4 in B minor. Lasting some 20 minutes, we hear the ruminative opening section.

Franck’s failure to impress, either as a pianist or as a composer, brought in the following years the need to earn a living as a teacher and as an organist; his reputation in the latter role over the ensuing decades led to his appointment in 1872 as professor of organ at the Paris Conservatoire. Before we leap forward to his maturer years that brought him more success as a composer, however, I have another couple of extracts that may be of interest.

Franck composed four operas, the earliest of which, Stradella (1841–42), was written while he was barely out of his teens. The work was resurrected for the first time in 2012 at a performance in Franck’s birthplace. The recording we’re about to hear is probably still the only one that is commercially available. Here’s the music that closes Act II for your judgment as to its dramatic promise.

It wasn’t until 40 years later that Franck made his next foray into opera with Hulda. Mid-way, in 1860, he produced this gem of a song that sets verse by Victor Hugo – Roses et papillons.

And so to Franck’s latter years and a small selection of extracts from his larger-scale works, with apologies for omitting any of your favourites, especially organists! First up is the symphonic poem Les Éolides, written in 1875 and based on a poem by Charles Marie René Leconte de Lisle about the Aeolids (‘The Breezes’), daughters of Aeolus (the God of the Winds). Franck’s musical response vividly depicts these mythological women, who reawaken nature with their song. It’s been suggested that echoes of Wagner and Mendelssohn can be detected, alongside pre-echoes of Impressionism. Do you agree? We hear the second half of the work.

This brief introduction to Franck’s output concludes with three works that were all premiered in the final decade of his life – 2 chamber, 1 symphonic. Franck’s Piano Quintet in F minor was first performed at the Société Nationale in January 1880 and was dedicated to Camille Saint-Saëns, who played the piano part on that occasion. It’s said that Saint-Saëns seemed out of temper during the performance and that when it was finished he left the platform abruptly, leaving behind the score that had been dedicated to him. Thereafter he apparently did his best to discourage further performances. Fortunately for us, he didn’t succeed. Here’s how the work ends.

Franck’s String Quartet in D major comes at the summit of his achievement, first performed six months before his death in November 1890. It’s a work of some complexity that ends with a contrapuntal finale and a sense of indebtedness to the German tradition as embodied in the music of Beethoven and Brahms. In the scherzo, however, it’s Mendelssohn that again seems to be the principal reference.

Franck inscribed his only symphony, the Symphony in D minor, “to my dear friend” (and pupil) Henri Duparc. His last work for orchestra, it had an inauspicious premiere in 1889 at the Paris Conservatoire. The noted conductor Charles Lamoureux had refused to take on the job and was replaced by Jules Garcin. Franck’s loyal student Vincent d’Indy recalled the chilly premiere:

“The subscribers could make neither head nor tail of it, and the musical authorities were in much the same position. I inquired of one of them—a professor at the conservatoire and a kind of factotum on the committee—what he thought of the work. ’That, a symphony?’ he replied in contemptuous tones. ‘But my dear sir, who ever heard of writing for the cor anglais in a symphony?’

Posterity, fortunately, subsequently had different ideas and the Symphony in D minor went on to be admired among the younger generation of French composers and prove influential in reinvigorating the French symphonic tradition after years of decline.