From the Naxos Blog: When in Rome… 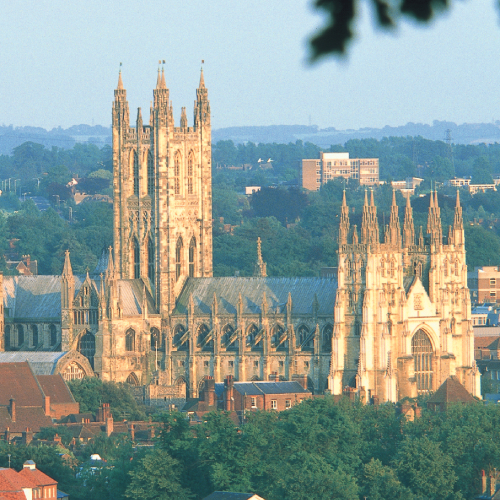 I live in the city of Canterbury, in the south east of England. It attracts many visitors, principally for its magnificent cathedral and plentiful other reminders of mediaeval life, from its city walls and towers to 14th-century pubs and Dane John, a strategic defence mound cited in the Bayeux tapestry.

Step inside the 15th-century Three Tuns Inn, however, and a notice will remind you of the city’s Roman roots that are buried beneath the current street level; the Romans lived in Canterbury from c. 70 AD to c. 410 AD. At one nearby hotel, part of the foyer floor is constructed of glass so visitors can view part of the walls that defined a modest theatre, constructed around the same time as the Colosseum in Rome, and subsequently developed into a vast, four-storey amphitheatre. Down the road in Canterbury’s Roman Museum, the well-preserved mosaics of a domestic building are just one of the attractions.

For this blog, then, I thought I would move from wordy descriptions to six pieces of music that are redolent of the Roman way of life — from Julius Caesar to thundering chariots, delicate mosaics, Roman roads and stupendous arenas. 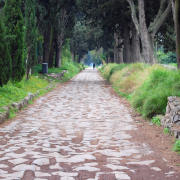 We start with a reference to the first of the major Roman roads, The Appian Way, built to transport military supplies to and from Rome in the year 312 BC. It’s been immortalised in music by the Italian composer Ottorino Respighi (1879–1936). He wrote 12 tone poems divided into 3 sets, each with 4 movements and evocative titles: Roman Festivals, Fountains of Rome and Pines of Rome. The last set ends with The Pines of the Appian Way, which Respighi introduced as follows:

“The Pines of the Appian Way — misty dawn on the Appian Way. The tragic landscape is guarded by solitary pines. Indistinctly, incessantly, the rhythm of innumerable steps. To the poet’s fantasy appears a vision of past glories; trumpets blare, and the army of the Consul advances brilliantly in the grandeur of a newly risen sun toward the Sacred Way, mounting the Capitoline Hill in triumph.” 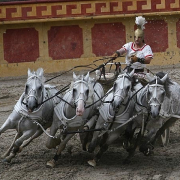 Although Roman chariots were used both in warfare and as an entertainment spectacle, I’ve chosen a song that presents a darker, more considered undertone of the usually rapidly deployed carriage. The text, by the American poet Emily Dickinson (1830–1886), portrays the personification of Death, who visits the poem’s narrator and takes her on a carriage ride to the afterlife. American composer Aaron Copland (1900–1990) credited his setting of the poem with inspiring the remainder of his Twelve Poems of Emily Dickinson, which he completed in 1950, saying:

“I fell in love with one song, The Chariot, and continued to add songs one at a time until I had twelve. The poems themselves gave me direction, one that I hoped would be appropriate to Miss Dickinson’s lyrical expressive language.” 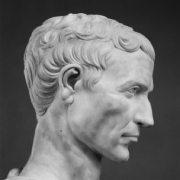 One of the more famous names associated with the Roman Empire is that of Julius Caesar (100 BC – 44 BC), a statesman and general who greatly extended the empire before seizing power and making himself dictator of Rome. During one of his military campaigns, he found himself in Egypt, hence the choice of my next piece, an aria from Handel’s 1724 opera Giulio Cesare in Egitto.

Caesar sings his aria Va tacito e nascosto when he finds himself at the palace of Tolomeo, king of Egypt, who has just given Caesar a cool reception and whom Caesar views with suspicion. Accompanied by strings and horn, Caesar compares himself to a stealthy hunter carefully tracking his prey (Tolomeo). Here’s the English translation of the aria:

How silently, how slyly,
When once the scent is taken,
the huntsman tracks the spoor.

The traitor shrewd and wily,
ne’er lets his prey awaken
unless the snare be sure.

The role of Caesar was sung at the opera’s premiere by the celebrated alto castrato Senesino. Our recording features the voice of Jochen Kowalski (b. 1954), the noted Polish-born German counter-tenor. I suspect the original Caesar would have considered himself more of a heldentenor. 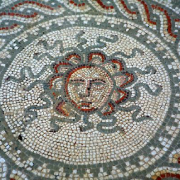 Roman mosaics were not only beautiful works of art, they also documented everyday life and objects. They have also proven to be a not infrequent source of inspiration for classical composers. Of all the works in the catalogue with the title, I’ve chosen Mosaic by the American composer Elliott Carter (1908–2012). It’s scored for solo harp and seven instruments (flute, oboe, clarinet, violin, viola, cello, double bass). Carter himself wrote the following note on the piece:

“Carlos Salzedo, the extraordinary harpist, was a member of the small group of modernists that surrounded Varèse and Ives in the 1920s and 1930s and has remained a memory which I cherish. His unusual developments in harp technique always seemed to me too infrequently explored in recent times. So in writing Mosaic, commissioned by the Nash Ensemble, I decided to explore many of his exciting inventions to recall his friendship in the early 1930s. The score is formed by many short mosaic-like tessera that I hope make one coordinated impression.”

Here’s the second half of the work. 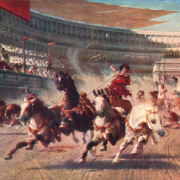 My final two extracts are based on the same subject — Rome’s Circus Maximus — the first from John Corigliano’s eight-movement Symphony No. 3, “Circus Maximus”, the subtitle also forming the title of the sixth movement. The composer introduces the work as follows:

“The Circus Maximus of ancient Rome was a real place. The largest arena in the world, it entertained over 300,000 spectators daily for nearly a thousand years. Chariot races, hunts and battles satisfied the Roman public’s need for grander and wilder amusement as the Empire declined. The parallels between the high decadence of Rome and our present time are obvious. Entertainment dominates our culture, and ever-more-extreme ‘reality’ shows dominate our entertainment. Many of us have become as bemused by the violence and humiliation that flood the 500-plus channels of our television screens as those mobs of imperial Rome who considered the devouring of human beings by starving lions just another Sunday show. The shape of Circus Maximus was built both to embody and comment on this massive and glamorous barbarity.

Circus Maximus, the sixth movement and the peak of the work incorporates all the other movements and is a carnival of sonoric activity. A band marching down the aisles counterpoints the onstage performers and the surrounding fanfares. Exuberant voices merge into chaos and a frenzy of overstatement.” 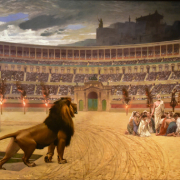 We return finally to Respighi and his take on the same subject. He preferred to title his symphonic sketch Circenses (think panem et circenses, as in the ‘bread and circuses’ of often bloody entertainment) and introduced it as follows:

“A threatening sky hangs over the Circus Maximus, but it is the people’s holiday. Ave Nero! The iron doors are unlocked, the strains of a religious song and the howling of wild beasts mingle in the air. The crowd comes to its feet in a frenzy. Unperturbed, the song of the martyrs gathers strength, conquers and then is drowned in the tumult.”