Earlier this month, Marin Alsop finished her successful six-year tenure as Principal Conductor of the Bournemouth Symphony Orchestra. She conducted Mahler’s Symphony No. 10 at the orchestra’s home, Lighthouse, Poole. Worldwide listeners can tune in via the Internet to BBC Radio3 to hear the BBC Radio rebroadcast of this concert.

Daily Telegraph
“What a fabulous final flourish … During six years at the helm she has struck a happy rapport with players and audience, and anybody who hears the BSO often will know that she leaves the orchestra richer in terms of polished technique, keen response and a public profile that now radiates internationally.”

The Times
“By the time Marin Alsop had raised all the members of the Bournemouth Symphony Orchestra to their feet at the end of her final concert with them as principal conductor, the entire audience was on its feet as well. A long standing ovation greeted a conductor who, in just six years at Bournemouth, has turned the BSO round, expanded and extended its work, visibility and repertoire—and won the hearts of a huge audience.”

Marin Alsop describes her time with the Bournemouth Symphony Orchestra on her website: “I doubt that I will ever encounter such dedicated and devoted musicians or such loyal and supportive listeners as I have been privileged to have here in the southwest of England. Our recordings are another great source of pride for me. Over six years we will have released 15 CDs on the Naxos label, from Adams to Takemitsu, Weill to Orff! With many more to come, I am thrilled to continue this important work with the orchestra.” 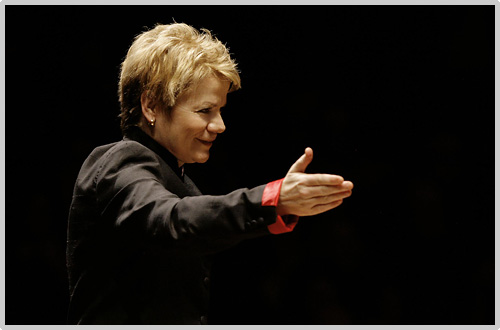