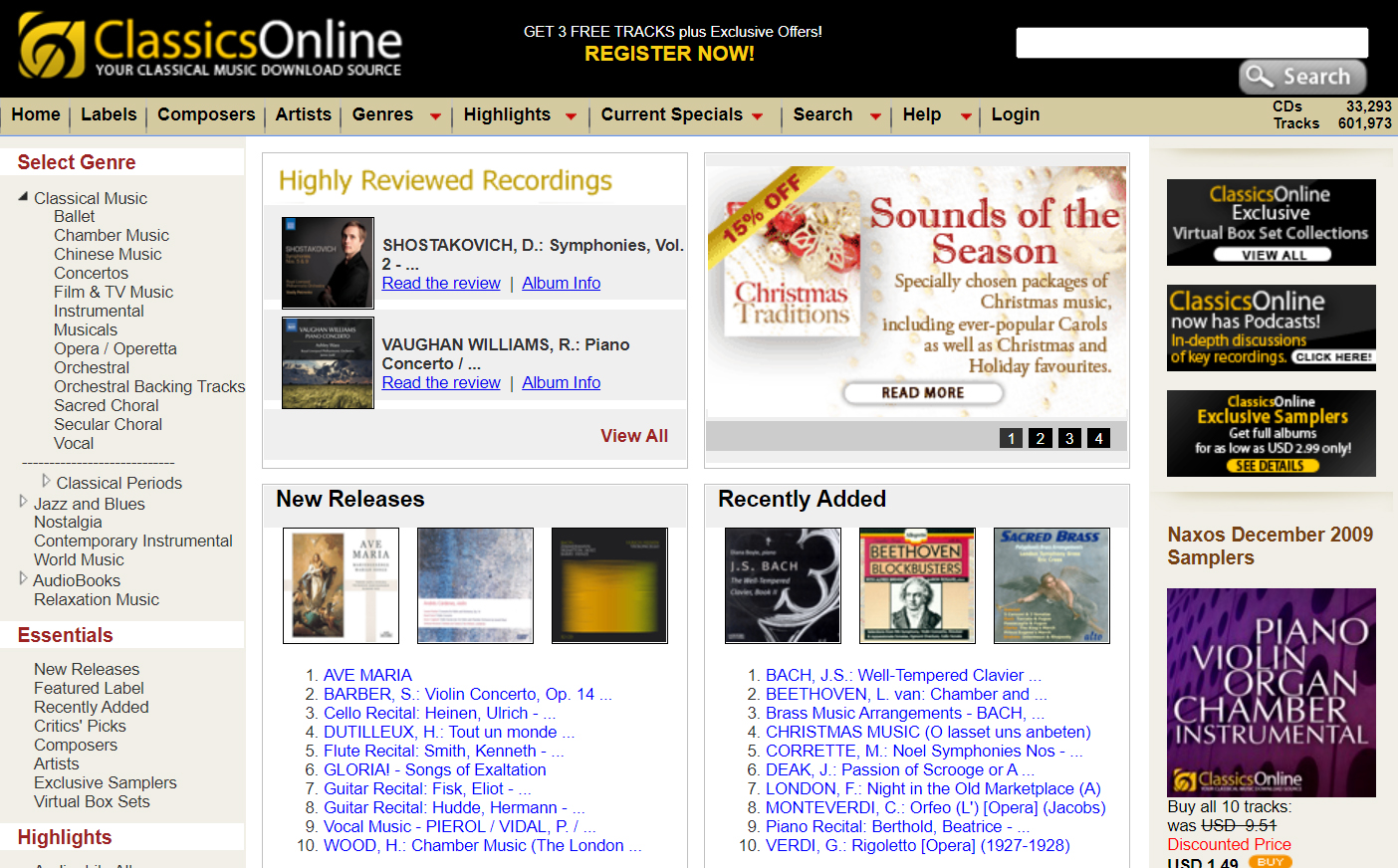 New York/Hong Kong/London/Cannes: On December 21, 2009, it was announced that Naxos’ premier download site, ClassicsOnline.com, has been honoured with the 2010 “Classical Download Award” by the MIDEM Classical Awards Jury.

Founded in 2005 as the successor of the Cannes Classical Awards, the MIDEM Classical Awards 2010 recognize creativity, innovation of repertoire and artistic excellence in classical music. Each year, a prestigious international Jury made up of the leading specialist magazines, radios and organizations, comes together to recognize top artists and recordings of the year. The Classical Download Award honors a download site which has garnered a devoted following among classical music lovers and aficionados—whether the site be a commercial or a non-commercial one, and whether it be the site of an Orchestra, a Choir, soloist, ensemble or the site of a label or a distributor.

About ClassicsOnline:
Naxos Chairman and Founder Klaus Heymann launched ClassicsOnline in May 2007 as a repertoire- and customer-focused resource for the newest classical releases, standards, rarities and bargains from the most popular independent labels, including his own Naxos and Marco Polo labels. ClassicsOnline is yet one more example of Naxos bringing innovation and change to the classical and general music industries. ClassicsOnline does not give preferential treatment to any label, and offers customers a variety of label options and sales points that cater to every taste and budget. Some of the more than 100 labels ClassicsOnline offers include: Berlin Classics, BIS, Capriccio, CBC, Chandos, CPO, Chicago Symphony Orchestra Resound (CSO Resound), Delos, Haenssler Classic, Harmonia Mundi, Hungaroton, Naïve Classique, New Amsterdam, Ondine, Profil and Wigmore Hall Live.

About Naxos:
Naxos has focused on maintaining its repertoire- and customer-focused philosophy since Klaus Heymann founded it in 1987. It is the world’s leading classical music label, garnering awards from major music publications like Gramophone, numerous Editor’s Choice awards, GRAMMY nominations and awards, nominations and wins from the Cannes Classical Awards, and AFIM nominations and awards. With offices in 12 countries, the company’s properties include www.Naxos.com, www.classicsonline.com, www.NaxosMusicLibrary.com, www.NaxosRadio.com and www.NaxosDirect.com.