Three Symphonies for Wind Ensemble by Alan Hovhaness, Nos. 7, 14 and 23, were recored by the Trinity College of Music Wind Orchestra, conducted by Keith Brion. Hovhaness (1911–2000), went through a period of critical re-evaluation and discovery in the early 1940’s, destroying nearly all the music he had composed until that point. The next half-century would witness the creation of numerous musical works clearly and definitively distinct from Western music tradition.

Symphony No. 7, Op. 178 (Nanga Parvat) and Symphony No. 14, Op. 194 (Ararat), were composed on commission within a year of each other. Both sonorous works feature harp in addition to the array of winds, drums and bells. Symphony No. 23, Op. 249 (Ani) was composed little more than a decade later and features large band and antiphonal brass choir.

Sessions took place from 30 January to 1 February 2008 at Blackhealth Hall, Trinity College of Music in Greenwich, UK. The sessions were produced and engineered, in Surround Sound, by Mike Purton and Martin Atkinson. The recording was designated as a “special project” by the administration of the Trinity College of Music, which meant that the students auditioned for it, and then were given expert coaching by the faculty on the music. 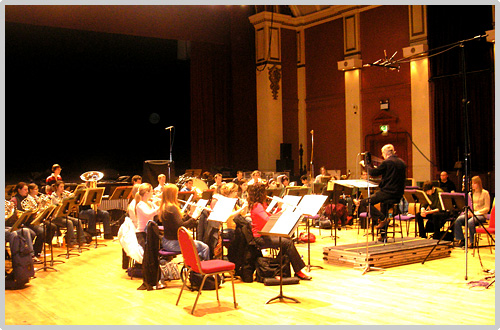