Quite by accident, I came across the fact that November 25, the date of this posting, also marks the 1955 premiere of American composer Walter Piston’s Sixth Symphony. Taking the lead from that touch of serendipity, I thought this edition might give a sketch of the composer and his output. Within my own sphere of experience, his name is better known than his music. 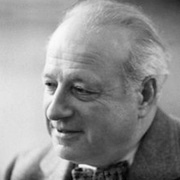 Piston (1894–1976) was largely self taught as a musician and initially looked set for a career in engineering, with music as a side course, but following the First World War, Harvard University opened its doors to him as a music student. That was in 1919. He graduated five years later and then pursued advanced studies at the École Normale de Musique in Paris with distinguished teachers Nadia Boulanger, Paul Dukas and George Enescu. Returning to Boston in 1926, Piston joined the music staff at Harvard, where he was to remain until his retirement in 1960.

Piston’s Harvard duties meant that composition was largely restricted to the summer vacations, notably in a series of works commissioned for the Boston Symphony Orchestra by his long-time advocate Serge Koussevitzky. (The Sixth Symphony, referenced earlier, was commissioned to mark the orchestra’s 75th anniversary). Continue reading and listening at blog.naxos.com.