Classical music is probably more familiar than we might at first imagine. Indeed, nowadays it is all around us, whether it be in restaurants, supermarkets, lifts, for advertising or as theme and incidental music on television. A great deal of film music either directly uses or draws from the ‘classical’ tradition; a good example of the former might be ‘2001: Space Odyssey’, and of the latter, the many scores John Williams has composed in recent years for such blockbusters as the Star Wars and Indiana Jones trilogies.

In the vast and wide-ranging world of ‘classical’ music there is truly something there for everyone - pieces which once discovered represent the start of an exciting and irresistible journey which will provide a lifetime’s listening pleasure. For example, those who are particularly excited by hearing instrumentalists working at full stretch will thrill to the likes of Liszt and Paganini, or if something a little more reserved and self-contained is required, the chamber music of Haydn or Mozart would be a good starting point. If a full symphony orchestra in overdrive is more to your taste then Tchaikovsky or Richard Strauss could well fit the bill, whereas those who have already warmed to Vivaldi’s ‘Four Seasons’ might well try the music of some of the great Italian’s contemporaries such as Handel, Johann Sebastian Bach or Domenico Scarlatti. Whatever your tastes may be, there has never been a better time to start building a ‘classical’ music collection on CD.

Any attempt to define what is meant literally by the term ‘classical’ music is fraught with difficulty. How does one encapsulate in just a few words a musical tradition which encompasses such infinite varieties of style and expression, from the monastic intonings of Gregorian chant to the laid-back jazz inflections of Gershwin’s Rhapsody in Blue, from the elegant poise of Mozart’s Eine kleine Nachtmusik to the despairing, heightened emotionalism of Tchaikovsky’s "Pathetique" Symphony? One is treading on very dangerous ground indeed if one pre-supposes that it is simply ‘superior’ to other musical types such as popular, jazz, rock and the like, let alone the music of other cultures.

In general ‘popular’ music may be as clear in expression as the longer examples of ‘classical’ music. One important difference, however, lies in the logical connection that exists in ‘classical ’ music between the beginning and end, with the latter a logical extension and development of the former. ‘Popular’ music, on the other hand, tends to present its material without development, the music ending when interest is exhausted.

Sadly, whilst ‘classical’ music is socially undivisive in itself, it has unfortunately become associated in most people’s minds with the intellectual elite. Even now, and with certain honourable exceptions, the attending of a ‘live’ concert can be an intimidating (not to say costly) experience for the uninitiated, especially in that most jealously guarded of establishments, the opera house. The wonderful thing about the technological age in which we live, and particularly the advent of the compact disc, is that we can bypass all irrelevant social and intellectual pretence, and enjoy in the comfort of our own home (often at far less cost) some of the finest music ever composed.

With such a breathtaking variety of material available, it is an awesome task to know just where to begin your disc collection, and as a result expensive mistakes are often made as tempting looking purchases turn out to be something of a disappointment. This is where the Naxos catalogue really comes into its own, and where it is hoped this guide will help prospective purchasers to make an informed choice about the kind of music they are likely to enjoy.

The Naxos label provides a library of high quality performances of music by the great masters in modern digital sound; accompanied by authoritative and user-friendly booklet notes and at the lowest possible price. There are already nearly 7,500 titles from which to choose, and with new releases emerging at the rate of about eight every month, even the enthusiastic collector is well and truly catered for. With every historical period and genre covered, there is something in the Naxos catalogue for everyone, especially those who wish to build a truly representative collection of the central masterworks in the ‘classical’ tradition.

BACK TO TOP
Music Categories

Over the last 1,000 years, ‘classical’ music has been composed in a variety of genres which are themselves worthy of investigation; indeed many seasoned collectors gradually move towards a particular preference after a time, be it violin concertos, piano sonatas, string quartets, religious music or opera. Whatever the form or description of any given piece, it usually falls comfortably into one of five broad categories: orchestral, chamber, solo instrumental, choral or opera.

The typical orchestra as we know it today, consisting of upwards of eighty players, can be traced back roughly to the middle of the 17th century. By this time the string section already formed the basis of any large ensemble of players, with brass, woodwind and percussion being added variously as the situation demanded. By the end of the Baroque period (c.1750) this was still very much the case, so that it was not until the end of the eighteenth century when the Classical period was at its height that a full woodwind section had become more or less established, often with the addition of horns, trumpets and timpani. It was finally during the mid-1800s that the orchestra settled into a regular, basic pattern of strings, woodwind, brass and percussion, with various ‘exotic’ instruments being introduced from time to time.

The most common genres the collector is likely to come across may be summarised as follows:

Symphony
commonly in four, but occasionally only in three, contrasting movements, the outer ones often being vivacious in character, with a more reflective slow movement and contrasting minuet or scherzo.

Symphonic Poem
a one-movement work popular during the nineteenth century, with a story-line or programme often detailed by the composer.

Overture
usually the orchestra-only curtain-raiser to an opera, often used to open concerts. During the nineteenth century it became increasingly fashionable to compose independent concert overtures, occasionally with picturesque titles.

Concerto
evolved from various forms of works using a solo instrument throughout the Baroque era and by the end of the eighteenth century denoted a work invariably in three movements (fast-slow-fast). It was designed principally as a work to demonstrate the virtuosity of the soloist, and was often written for the composer’s own use as a soloist.

Ballet
evolved from passages of dance music, usually in an operatic context, into the popular, full-scale Romantic classics of Adam, Delibes, Tchaikovsky, early Stravinsky and beyond.

Suite
usually a selection of short movements taken from a ballet or incidental music, sometimes orchestrations or another composer’s work, although quite often an entirely original set of pieces.

Normally understood to be any type of music composed for a small ensemble of between two and approximately fifteen players. Larger groups are usually referred to as a chamber ensemble/orchestra.

The most basic form is a work for solo instrument with keyboard accompaniment. There are countless miniatures of this type, particularly for flute, violin, cello, oboe, and clarinet, often with descriptive titles. For slightly larger appetites, there are also numerous accompanied sonatas dating from the Baroque period onwards, typically in three or four movements, and after about 1750 corresponding roughly to symphonic structure. Duets also exist typically for two instruments of the same family (e.g. violin and viola, or flute and clarinet) although pieces for almost any duo combination may be encountered.

Into this category falls any music composed for a single, unaccompanied instrument. Although distinguished examples exist for every conceivable instrument (including various works for percussion), the bulk is composed either for the organ (in a vast variety of styles and genres), keyboard (piano, harpsichord, clavichord, spinet, virginal), guitar (mostly miniatures/arrangements in the popular Spanish idiom) or lute (mostly dating from the Renaissance and early Baroque periods).

The oldest genre of all, for what is humanity’s oldest ‘instrument’- the human voice. Anyone wishing to trace a stylistic history of classical music could do no better than to examine vocal music, for every composer worthy of the name wrote at least something which involves singing of some description.

In its simplest form vocal music consists of a single, monodic line, as in Medieval Gregorian chant for example. From this was derived all music for unaccompanied choir, so that as one moves further forward in time, more and more independent parts are gradually added, and the musical language and texturing becomes correspondingly more complex. The great majority of texts of pieces for unaccompanied and accompanied choir (masses, motets, psalms, canticles, vespers etc.) had a religious basis until the turn of the present century, although there are notable exceptions, especially regarding the secular madrigalists of the sixteenth century.

If choral music in the ‘classical’ tradition tends towards the sacred, then the accompanied song, chanson, ballade, virelei, lied or melodie is almost invariably secular in origin or intentions. Indeed there are Medieval and Renaissance songs which are positively ribald in terms of their chosen texts. The most popular form within this category is, however, the keyboard accompanied art song, particularly the German Lied of the nineteenth and early twentieth centuries.

An Italian invention, opera was born right at the beginning of the Baroque era (shortly before 1600), and although stylistic approaches to the genre have been many and varied, the basic outlines have remained remarkably consistent.

Essentially a play set to music, the typical opera will open with an overture or prelude designed to set the scene or even introduce some of the most important themes to appear later on. The action will be split into acts and scenes, and within these the principal vehicles for expression are (a) the aria, duet, trio, etc. for the soloists; (b) the ‘chorus’, to allow a larger group to join in with or more usually comment on the action; and (c) recitative, a formal device similar to sung conversation, where the plot typically moves at a faster pace before the next set piece allows greater contemplation on the chain of events.

French opera also typically makes provision for an extended balletic interlude, and from middle-period Wagner onwards (c.1865), the general tendency is to interweave the various elements as seamlessly as possible, thereby avoiding the heavily sectionalised procedure which had then dominated the genre for over 250 years.

BACK TO TOP
Musical Instruments

Please visit the Musical Instruments page for information on this section.

BACK TO TOP
History of Classical Music

Please visit the History of Classical Music page for information on this section.

BACK TO TOP
Discover the Classics 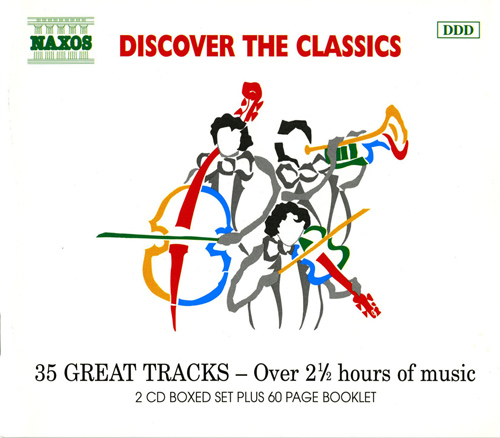 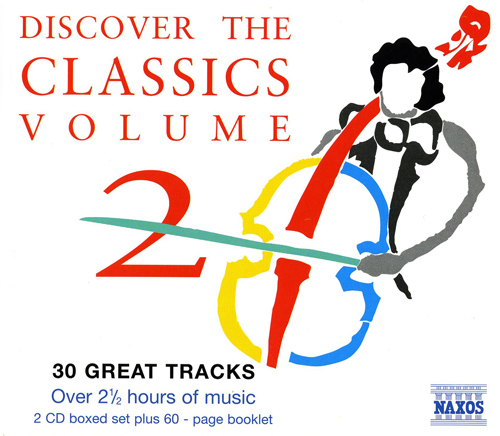 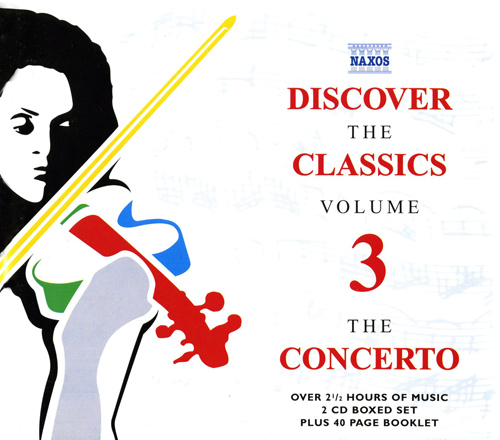 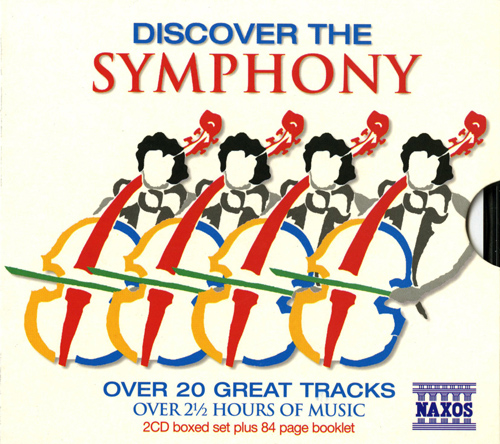 Discover the Symphony
(1998 edition)
Discover
BACK TO TOP