The great majority of musical instruments fall readily into one of six major categories: bowed strings, woodwind, brass, percussion, keyboard, and the guitar family, the first four of which form the basis of the modern symphony orchestra.

The four principle orchestral string instruments are (in descending order of overall pitch) the violins (usually divided into two sections, playing individual parts), the violas, the cellos and the double basses. Each have four strings arranged in order of pitch, can be played by means of a bow (arco) or plucked (pizzicato), but whereas the violin and viola are played with the instrument resting between the shoulder and the chin, the larger cello (or, to give it its full title, violoncello) is placed facing outwards between and slightly behind the knees, and the bulky double bass is played standing up or seated on a high stool.

Enthusiasts of Medieval, Renaissance and early Baroque music will encounter earlier varieties of bowed instruments known variously as vielle, viol, or in its earliest form, fidel (hence the modern nickname for a violin, ‘fiddle’). The most popular member of the viol family is the cello’s precursor, the viola da gamba (literally ‘viol of the legs’).

The four principle woodwind instruments of the orchestra all work by means of a system of keys (usually silver-plated) which when variously depressed and released allow air to pass through differing lengths of the instrument resulting in notes of different pitch. In order of descending overall pitch, these are: 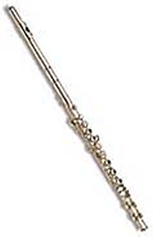 Flute
a normally silver-plated (or in more extravagant cases, gold), narrow-bored instrument, held horizontally just under the mouth, and activated by blowing air across an aperture at one end of the instrument. Its higher-pitched cousin, the piccolo, is often encountered, although the lower alto flute rather less so. Early forebears include the unkeyed fife. The most popular close relation is the recorder family, largely unkeyed and end-blown in the vertical position. 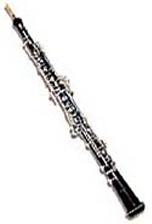 Oboe
a narrow-bored wooden instrument descended from the medieval shawm, held vertically, and activated by means of placing the end-positioned double-reed in the mouth, and blowing under high-pressure so as to force air between the two bound reeds, causing them to vibrate. Other members of the oboe family include the lower pitched cor anglais (or English Horn), and (far more rarely) baritone oboe and heckelphone (bass oboe). The instrument’s most famous predecessor is the Baroque oboe d’amore, often used by Johann Sebastian Bach.

Clarinet
like the oboe usually wooden, played vertically and held in the mouth, but with a wider bore and consisting of a single reed which when activated vibrates against a detachable mouthpiece. The standard instrument can be pitched in B flat (usually) or A, and the family is unusually extensive including the higher-pitched E flat, the B flat bass, the rarely-used C, the alto (a modern relative of the basset horn), and the even more obscure double-bass or ‘pedal’ clarinet. Occasionally the clarinet’s ‘popular’ cousin can be seen in the concert hall, the saxophone. 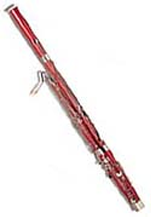 Bassoon
as the name would suggest, the bass member of the woodwind family, and by far the largest, especially its lower-pitched relation, the extremely bulky double or contra-bassoon. Like the oboe, it is a double-reed instrument, although to facilitate the playing action (the instrument is normally held across and in front of the body) it is connected to the bassoon via a silver-plated, curved crook. Its most notorious cousin is the Baroque serpent, shaped very much as its name would suggest.

Brass instruments are also activated by blowing into them, although instead of using a form of reed over which the mouth is placed, the lips are placed against or inside the cup of a metal mouthpiece, and made to vibrate against its inner rim. In order of descending pitch, these are:

Trumpet
one of the most ancient of all instruments. Played horizontally via a series of valves on the top of the instrument which are opened and closed in various combinations to create different pitches. Occasionally, the piccolo (higher) or bass (lower) trumpets are heard (and the trumpet’s ‘popular’ cousin, the cornet), although more common nowadays in ‘authentic’ Baroque orchestras (which use instruments of the correct period or copies thereof), is the ‘natural’ or valveless trumpet. The more notationally limited bugle is rarely heard away from its traditional military context. 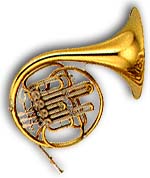 French horn
another ancient instrument, descended from the use of animals’ horns (hence the name) in pre-historic times. The modern instrument is the most outwardly complex, consisting of a basic tube, rounded into a compact shape culminating in a conical bore or bell, into which a series of valves are centrally set. Before the valve system had been developed, the changing of basic pitch was facilitated by the insertion of a variety of crooks which altered the length of the basic tube, and the changing of certain notes by holding the hand in a variety of subtly differentiated positions within the bell. In a popular context the term ‘horn’ invariably refers to the saxophone, and for the cor anglais see ‘oboe’ under the woodwind section above. Traditionally, the French horn section is seated away from the rest of the brass family.

Trombone
descended from the medieval sackbutt, it is the only popular orchestral wind instrument which operates without the use of a valve or key system. The trombone is easily recognisable by its extended elliptical shape culminating in a conical bore, and its distinctive use of a hand-operated slide held out in front, in order to change pitch. The slide can be moved to any one of seven main positions, each of which facilitate a different series of notes. The tenor and bass trombone are occasionally seen (especially the latter), although the alto and double-bass are extreme rarities.

Tuba
not unlike the French horn in basic construction, only more oval in shape and much bigger. The piston valve action is similar to the trumpet, only the valves themselves are situated in the middle of the instrument. A variety of types and sizes exist aside from the typical concert instrument in F (bass tuba), including the tenor tuba (higher), and double-bass tuba (lower), often referred to as a bombardon in a military or brass band context.

A percussion instrument is probably best defined as one where a resonating surface is struck by the player, either by hand or by some form of stick. These divide roughly into tuned instruments which have a definite pitch or series of pitches, and those of indefinite pitch. Popular examples of both types are:

Conveniently collected together as any instrument which is operated by means of a standard keyboard, the differences in operation are wide-ranging and carry obvious associations with certain of the above categories. These break down into four main types:

Plucked
mostly instruments emanating from the 17th/18th centuries where a series of stretched and tuned strings are plucked by a quill or plectrum (e.g. harpsichord, virginal, spinet).

Struck
where the strings are actually hit, either by a tangent (e.g. 17th/18th century clavichord), or hammers (e.g. piano, celesta).

Aerated
where the notes are activated by a column of mechanically propelled air within a series of tuned pipes (e.g. organ).

Electronic
where a number of effects approximating to those derived from any of the above instruments, as well as totally original sounds, can be achieved (e.g. electronic organ, synthesizer).

The ‘classical’ guitar is typically a Spanish-derived, six-stringed instrument played using a plectrum or the finger-nails, with frets set into the fingerboard. Popular music tends to use amplification for both six-stringed instruments and the four-string bass guitar. The guitar family gradually supplanted the lute which had come to prominence during the Renaissance.