A light opera comprising an overture, songs, dances and spoken dialogue that emerged as an independent genre in France during the early 19th century. The earliest example is Adolphe Adam’s Le Chalet (1834), but the most famous is Offenbach’s Orphée aux enfers (Orpheus in the Underworld, 1858) which contains the famous galop popularly known as the can-can. Contemporaneous Spanish zarzuelas can be deemed operettas in all but name; the same may be said of the Savoy operas by Gilbert and Sullivan (a 25-year collaboration from 1871–96), which are mostly given to satirising British social and formal institutions.

A Fool for Love

A to Z of Singers

Abraham: Ball at the Savoy

As Dreams Fall Apart: The Golden Age of Jewish Stage and Film Music 1925–1955

Fall: The Rose of Stambul

Gilbert And Sullivan (The Best Of)

Preludes and Choruses From Zarzuelas

Sing Me a Story: Musical Tales from Delos

Sirkia, Raimo: Romances From the Movies 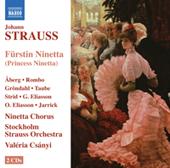 Strauss II: The Very Best Of